Korben Dallas' Handgun is a semi-automatic pistol used by Maj. Korben Dallas in the film The Fifth Element.

Korben was known to have carried this handgun throughout the film. Later on however, Leeloo took up his gun and held Dallas at gunpoint for kissing her while she was unconscious. Father Vito Cornelius would later be seen briefly with the weapon pointed at Dallas, but had no intention of using it. It wasn't fired until he was engaging the Mangalores at Fhloston Paradise. He however lost the weapon during the fight and took up a Mangalore Handgun as replacement. 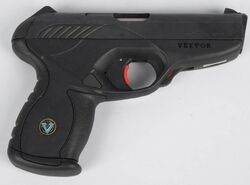 During the making of the film, Korben's handgun was like the Mangalore Handgun, nothing more than a heavily modified Vektor CP1.

Community content is available under CC-BY-SA unless otherwise noted.
Advertisement